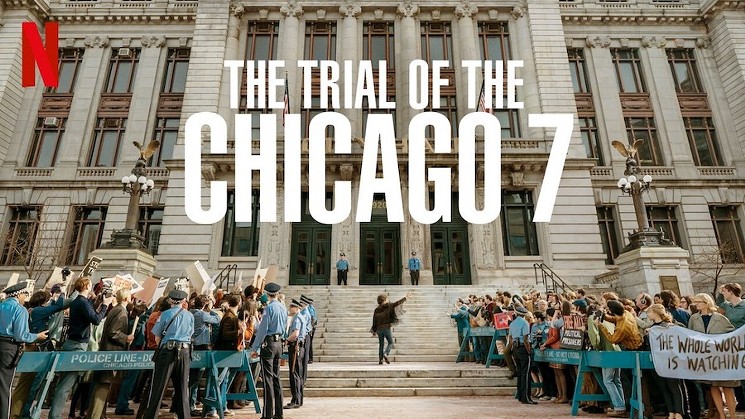 Aaron Sorkin has quickly become something of an idol for me. He has the ability to find the compelling elements of a story and then entertain you using people talking in a room. There is no big action scenes, no grand acts of love or even particularly funny moments in his films, they just grab your attention and never let go.

The Social Network was a film I only watched last year, and it blew my mind which the sharpness of the writing and the pace of the script. With him turning his hand to Directing in 2017 with Molly’s game which I enjoyed a lot, my excitement was quite high for The Trial of the Chicago 7, a film he wrote and directed.

If you haven’t seen other Sorkin films, then on the face of it this film sounds like a standard courtroom drama. It takes place in 1969, over the course of the trial of people accused of inciting riots in Chicago in 1968. The story is told from the court room, with regular cuts back to the events the trial goes over. This mechanic slowly gives us more and more detail. Even though at first I felt a bit lost in the courtroom trying to follow who was who, by the end I was completely engrossed.

Sorkin’s script slowly sucks you into it, setting up the trial quickly at the start before everyone sits down to deliver performance after performance. The cast in this is just dripping with talent, and I am a little surprised there is only one Oscar nomination between them all. That nomination has gone to Sacha Baron Cohen, who is unrecognisable from the actor behind Borat as he plays one of the defendents. His comedic timing is perfect, delivering sarcastic comments and remarks peppered throughout the film to just provide some needed levity.

There isn’t any performance here that lets the film down. I loved Mark Rylance as the defending lawyer, even if his hair just bothered me endlessly throughout. His back and forth with the judge and the witnesses is so compelling. I also have to mention that this is the most I have ever enjoyed an Eddie Redmayne performance, as he plays another one of the the 7. Any of Redmayne, Rylance, Baron Cohen or the judge Frank Langella could be up for a nomination and it would be well deserved.

The reason they’re all so good though, and my mind keeps going back to it, is the incredible screenplay. The story is laid out, and the characters are talking almost non stop through the just over two hours this film runs for. The pace at which the dialogue hits is ferocious, but never hard to follow. As much as I love a good action sequence, the back and forth dialogue in this film is every bit as entertaining as seeing John Wick fight his way through a city.

This is the first of the Oscar Nominated films I have watched on my list, and it’s set an unbelievably high bar. A screenplay Oscar feels inevitable. The Best Picture might not be far behind, I reserve the right to change that after I have seen the other seven nominees of course, and what a treat it will be if this isn’t the best film of the year.

Bad: I mean it is still a courtroom drama, and if that isn’t something you care for, I understand why it might not be for you. It’s worth a try though.

People have been telling me to watch The Social Network for years and I finally got round to it this week. Knowing a little about the back story, I was not really sure how this would go. It turns out Facebook had a more tumultuous past than I imagined. Would I “Like” it?

Jesse Eisenberg is always a bit odd when I see him in films, he is only ever worked as the guy in Zombieland, everywhere else he just never fits for me. That’s no longer the case now, as he is perfectly cast as Mark Zuckerberg, especially this version of him. I expected the film to spin things more positively towards him, but this is a sad story about a person so far in their own world they have not made any meaningful connections with other people. He is successful but has nothing outside of a bank balance to show for it.

From the first scene, I could tell who the star of the movie was, and it isn’t Eisenberg, it is the screenplay by Aaron Sorkin. The first scene in a busy bar with Zuckerberg talking to Erica sets the pace for the entire film. There is a lot of information given to you, but in the form of a conversation that’s seemingly about something else. You expect the scene to be about these two people’s relationship, which it does convey to a point, but its real job is to set up the character of Zuckerberg as a self-centred arsehole.

From that point the movie clips along delivering the story by jumping between board room meetings, College dorms, Facebook HQ and at one point an English boat race. Every line of dialogue in the film feels important and furthers the plot. It’s a rare thing to have a script where the dialogue is so sharp and purposeful. Having only seen the film this one time, I imagine with multiple viewings you will pick up little lines here and there that add to the experience.

From a technical standpoint, this movie is pretty much perfect. When all the components come together like they do in this film, they almost disappear. The score adds a lot throughout the film, without sticking in your head and distracting you. Every shot is framed to give you easy recognition of which situation you are watching as it jumps between environments and times. David Fincher makes sure the elements are all blended perfectly and that nothing is left to chance. Fincher was probably as meticulous during this production as Zuckerberg is shown to be in the film itself with his coding.

A stunning technical achievement, telling a story about something we all know of, brilliantly acted, what else could you want? The thing missing from this for me is quite odd. The elements are all there, but for some reason the film just didn’t captivate me. I was taking in all this information; I was enjoying all of the dialogue. Towards the end of the film, I found that there was nothing to evoke the emotional response in me that I look for in my very favourite films.

The Social Network is fantastic. It’s a brilliant showcase in all the technical elements of a film. It gives as much information as a documentary, although how much is accurate is irrelevant for the films purpose. Whilst it’s giving you all those nuggets of information, there is a war or words going on in the board rooms, there is the beginnings of a court room drama, there is a best friend feeling betrayed, there is a man so focused on building a social network, he forgets to have a social life.

Good: A fantastic screenplay delivers the sharpest, most focused dialogue you will find. All packaged in a phenomenally crafted box and delivered to you with pace.

Bad: This is an excellent piece of cinema but didn’t evoke the emotion to be one of my very favourite films.

TL:DR : The Social Network has one of the best screenplays of the 21st century, and it’s expertly translated onto the screen, something you should definitely take the time to watch.