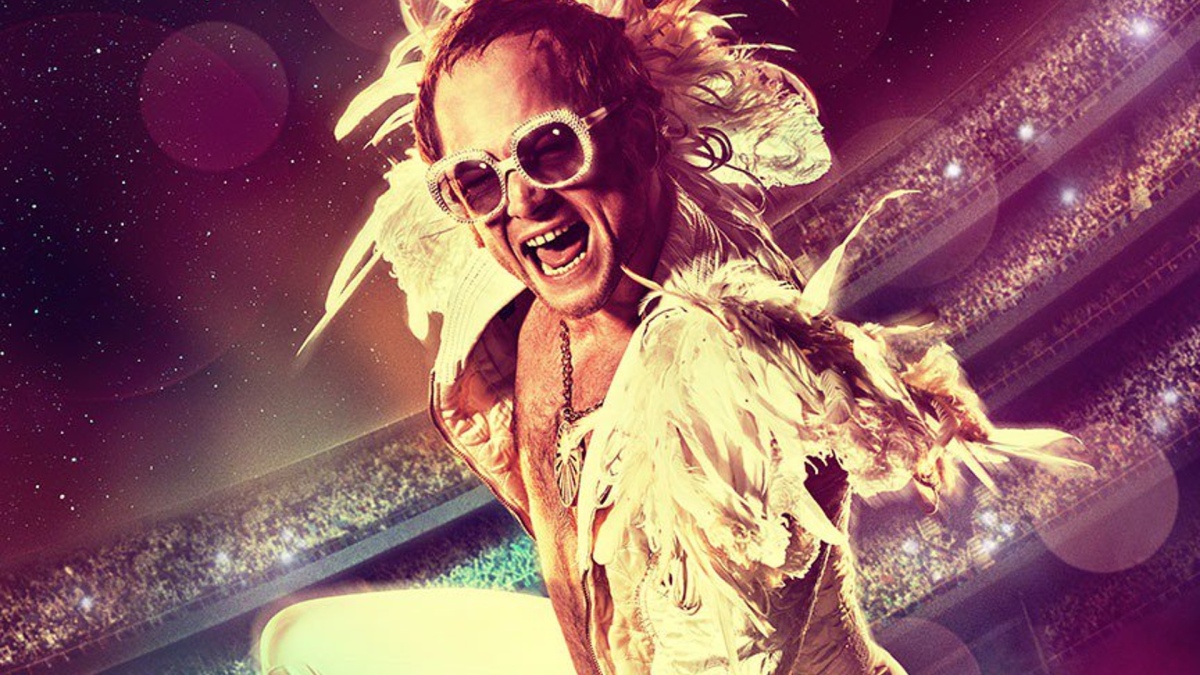 Last year we got Queen, this year we get Elton John. Taron Egerton takes on the role, allegedly handpicked by Elton John himself. Could he follow in the footsteps of Remi Malek and smash this out of the park. Dexter Fletcher, the uncredited director of parts of Bohemian Rhapsody, and after what he did with that film, I was excited to see what he could do with this story.

That is the end of the Bo-Rap comparisons for now, as I don’t want to discredit the film by just comparing it to another movie. Elton John’s story is one I knew of vaguely, but none of the details were clear to me. The film shows the pure talent of the musician, but also dives in deep to the core of the man. We see the highs and the lows, and it doesn’t pull any punches.

Getting the right actor to be Elton was always going to be the element that would make or break this film, and I have to say that Taron Egerton absolutely smashes this role. He becomes Elton for the duration of the film, and he shows he can carry a film and deliver on the emotional moments that are scattered through the film. On top of that, he has the voice and physical ability to carry off all the singing and dancing this film throws at him.

That brings me to the most fun element of Rocketman, the music. I went in expecting some of the biggest hits and a few concert recreations, but that is not what Rocketman delivers. This is a full-on musical, just with world famous songs that are positioned at the perfect times to fit the story. If you watched the film with no idea of Elton John or his music, you could easily think the music was created originally for this film. “Saturday Night Alright for Fighting” to “Your Song”, a big handful of Elton’s best-known music is served up.

The music punctuates key scenes, and for me worked at its best when it functioned as the exclamation point on key scenes. The other interesting use that may not work for everyone, is the use of his songs to stop the audience dwelling on any of the lower moments. We see Elton hit rock bottom, the lowest he could go, and it leads into a rendition of the title song. The way the song is filmed and performed, it worked perfectly for me and kept the movie from feeling too heavy at any time.

So far, it’s all been about Elton in this review, but whilst he is of course the main character, we do get some really good work from the supporting cast. His mum played by Bryce Dallas Howard is excellent as is his co-writer and best friend Bernie, played by Jamie Bell. Both have key roles in the film and share the stage with Egerton without ever outshining him, although I am not sure that would have been possible in this film.

The other major character in the film is John Reid, Elton’s manager and lover. He is played by Richard Madden, who does well in the role but the character itself is the main flaw in the film for me. Whilst the music numbers are fantastical and dreamlike, all the character moments between them felt real. As the film progresses John Reid goes from slightly manipulative to being full on moustache twirling evil. I felt he became a bit too cartoonish by the end of the film and that is a real shame as that is pretty much the only element of this film I didn’t enjoy.

Rocketman delivers on the potential the story has and is an incredibly fun time in the cinema. A brilliant performance by Egerton, that for me outdoes even Remi Malek in Bohemian Rhapsody, is one of many reasons to go and see this film. Unless you hate Elton John’s music, you will have a great time watching this.

Good:  Taron Egerton’s performance may be the best in 2019, Musical numbers that will have your feet tapping and a smile on your face and will leave you with a new appreciation for Elton John.

Bad: I found one character a bit too over the top evil, and that is the only real knock I can have. Oh and no Circle of Life. Come on.

After the longest break from the cinema in years, I finally saw the Jurassic World sequel. I’d managed to avoid spoilers and there was a lot of good buzz about the film so I was pretty optimistic going in.

Jurassic World in 2015 surprised me, it was a really fun return to this universe and Chris Pratt and Bryce Dallas-Howard seemed like good fits to lead this franchise.

Straight from the off JWFK (awkward abbreviation I know) indicates this will not be as light and fun as Jurassic World. It still has its moments of levity, but the overall tone is more like a kids horror film. This change-up works well, meaning it feels different to JW without really being all that different of a story to its predecessor.

A few years age passed since the events of the first film and the islands volcano is now active, as you may have guessed from the trailers. This is where he first half of the film takes place. It makes for some visually stunning scenes on the island, and even if there is some ridiculousness in terms of what characters get away with, you have to suspend your disbelief in these films, this is about dinosaurs after all.

From there the film pivots quite clumsily from big dinosaur and jungle action to a smaller area, and during the third act we really get a taste of that horror element I mentioned earlier. These scenes were the most engaging for me in the film and showed something a bit different to previous Jurassic movies.

There is a clear point in the film when it changes course and pivots but it’s done with no real subtlety. We have a character introduced who is clearly a bad guy, and the intentions of the antagonists are made clear. That’s pretty much all the depth we get from the villains, as aside from that it’s a similar situation to Jurassic World, with anew dinosaur introduced.

Chris Pratt and Bryce Dallas-Howard carry the film on their shoulders, with the two sidekick characters being odd additions. One I found annoying the other to be a bit more interesting but still not really important to the story. Jeff Goldblum is in the film but his part in the trailer is pretty much it, so don’t expect much from him.

At times Fallen Kingdom to wrestle some meaningful issues, addressing that these creatures are not monsters, just animals,but animals that are used to being top of the food chain. This comes into focus at the end of the film and the choices made here are interesting as I thought for a moment they was going to do something very brave from a franchise point of view but it wasn’t to be.

Jurassic World Fallen Kingdom provides more of the same for the franchise, and it’s an entertaining film, but what they do next in the franchise will need to bring something new to keep me engaged as a fan.