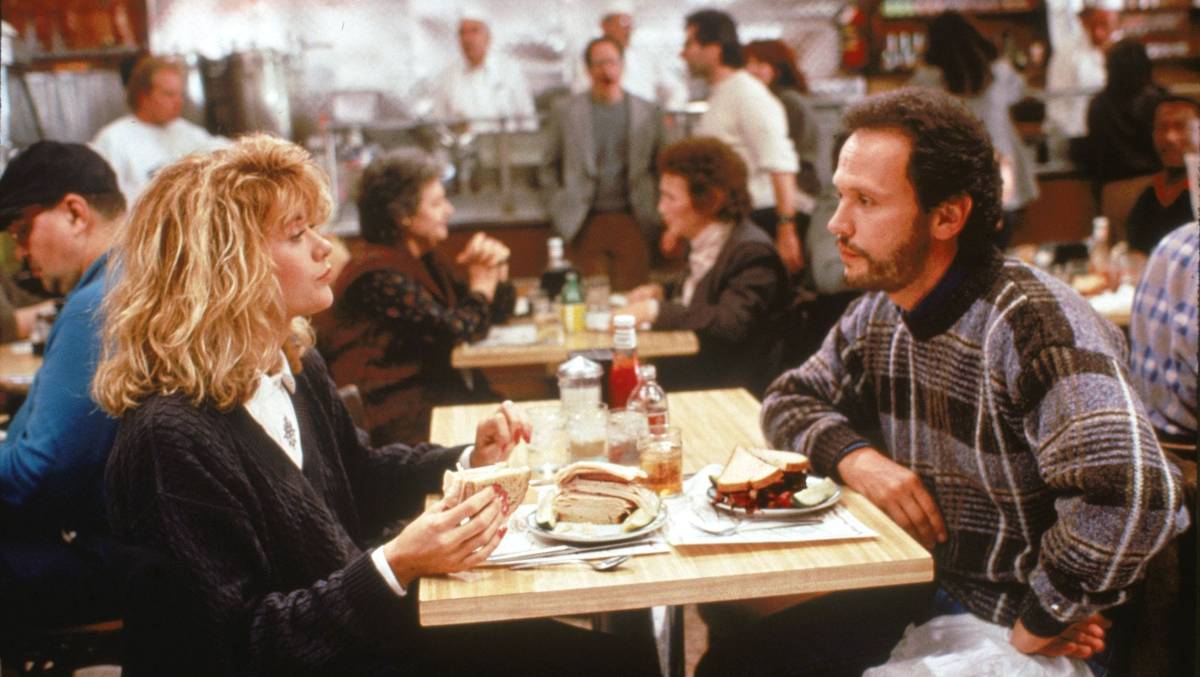 I apologise for neglecting the blog since this quarantine thing started, for some reason being stuck in doors all day for the last 4 weeks has not involved me watching any films. Until yesterday when I watched… Oceans 12. It’s a surprisingly fun time, but not one I felt was review worthy, but perhaps I will review all 4 Ocean films at some point. After that, I decided to cross one of my list of shame classics off the list and watched When Harry Met Sally.

I didn’t know what to expect, all I knew was Billy Crystal is usually funny, and Meg Ryan was the Rom Com queen for a hot minute. Within minutes of the two of them interacting, I knew this was a special film. Their chemistry is lightning in a bottle which works perfectly with a script that feels so sharp.

Crystal’s Harry is one of those guys who is supremely confident and witty, to the point that you almost think you might be sick of him after a while. Due to the time jumping nature of the story we are allowed to see the growth in its broader strokes, through the different phases of his twenties and thirties. He’s a player, then he’s a devoted married man, then he’s heartbroken and struggling to get over it whilst simultaneously returning to his player days. All this is there under the quips and fast ramblings that make him such an entertaining character.

Sally (Meg Ryan) reminds me of some people I know, who are always looking for something but can’t quite put their finger on what. She’s cut from a different cloth to Harry and feels rigid against the free-flowing guy she’s met. Similar to Harry’s development, we see her become a woman. She is more confident but no less certain about what she’s looking for.

There are scenes in this movie that had me rolling with laughter. That cafe scene is iconic for a reason, but there are so many fun moments that feel genuine and endearing whilst also making you chuckle. Mixed in with those laughs, like razors in candy floss, are moments that will hit you hard, varying depending on your circumstances. They’re moments that feel genuine, and whether it’s the “I’m Sorry” hug after a heated argument or the probably often repeated confession of love, you will feel something all the way through the film.

When Harry Met Sally is the kind of film, I dream about making one day. You connect with the characters immediately, and their dialogue and chemistry are the thing that stops you taking your eyes away from the screen. I expected a fun and probably dated rom-com. I got a film that has propelled itself to being high on my list of Favourite films.

Good: Chemistry off the charts, a script that you could cut diamonds on, and some great laughs.

Bad: Honestly nothing comes to mind. It achieves everything I think it set out to.

TL;DR – If you haven’t seen this, it should be the next film you watch.

Yes, I am getting rid of scores. I never liked that part of reviewing things. I am replacing it with TL;DR, which stands for Too Long; Didn’t read. So, if you just wanted to know my thoughts in a second, there will be a one- or two-line summary at the end of my reviews now.