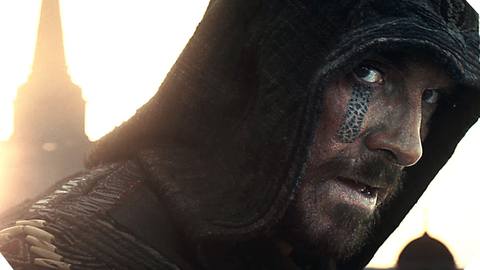 Having adored the last Assassins Creed video game, when I saw the movie on a streaming service I decided to jump in and see how the film turned out. I hadn’t heard good things from when the film was released and I never got round to seeing it in cinema’s, but I always hope for a film to be good.

I loved the director and actor combo of Justin Kurzel and Michael Fassbender (as well as Marion Cotillard) work on 2015’s Macbeth. A film that was true to the Shakespeare story but with some really stylish action that promised much for this more action heavy film. I will go in-depth on my thoughts of the action later, but I was expecting some great action at the very least from Assassins Creed.

As a fan of the games, I know the lore and long running story behind this film, and that did help me to understand some parts of the film. It did make me think that someone watching this with no prior knowledge may think it’s a bit over complicated and there may be a lot of unexplained plot points and information that would be really useful to the viewer. The film has several easter eggs and hints at the franchise’s gaming heritage, but it never commits fully to that lore and there are no name drops for franchise icons Ezio or Altair. They are hinted at, in one particularly odd scene specifically, but it feels like this film is set in the world as well as separate from it, as no game has mentioned any of the events that take place here as far as I am aware.

Fassbender is in the lead role, and is fine. Which I think is a good word for every performance in this picture. Nobody stands out, everyone is just playing the part they’re given and doing what they can with some questionable dialogue. Nobody feels fully invested in their role and that disappointed me a little, as I felt there was a lot of potential with the cast they put together for this one. Cotillard and Jeremy Irons have an interesting dynamic that is touched on but then falls into the generic roles of the sympathetic villains daughter and the irredeemable evil man.

The lack of meaningful character development we do get with the main character, Fassbender’s Cal Lynch, doesn’t seem to go anywhere and then magically something clicks and he’s a new man. I know video games have had some ropey character development in them over the years, but this script doesn’t give anyone enough to really go on an arc that is worth watching.

The other side of Fassbender’s role, as Spanish assassin Aguilar, is intriguing, but that is it. We don’t learn anything about him, why he does what he does, except from a cursory line thrown in to explain why he is who he is. From then he has action scene after action scene, with no explanation or motivations given for why he is doing what he is doing. For me this films divided and broken by the jumps between time, even with action scenes cutting between the two.

The biggest departure from the lore of the AC games is the way the Animus is shown. Every incarnation to date has been a headset or a table you lay on and essentially view through the eyes of your ancestor, with no physical interaction in the current day. For some reason, the film makers behind this film decided to scrap that, and put Michael Fassbender on a giant arm that flings him about as he is living through the eyes of his ancestor Aguilar. The decision to cut between this and the historic time just did not work at all for me.

The action scenes, and there are plenty, are all well shot and in particular the hand to hand, blade to blade combat in ancient spain is brilliant. however we rarely get an entire sequence of action without being shown that Cal is doing it on the giant arm at the same time. The film constantly reminds you there are no stakes here, it’s just a video essentially. That, combined with the complete lack of character development for our ancient assassin make every action scene feel hollow, no matter how cool it looks.

Assassins Creed is a brilliant premise, one ripe for the picking of any film maker to produce gold with. But for god sake, commit to it. We have 100s of hours of games and stories, all set in ancient history. Over the years the modern-day side of AC has largely become a side plot, with 99% of the games being set in the chosen historic setting. For three games we learnt about Ezio, and was hooked on his story, all whilst there was some side stuff happening with Desmond that nobody really cared for. This film should have learnt from the AC games, and whilst it’s clearly inspired by them, I can’t help but feel they missed the mark this time round. There is so much potential here, but I am not sure any studio will attempt it after this mess.

Bad: Throwing away a premise with so much potential should be enough to put the script writers and directors in movie making prison.